My original trip to New York was cancelled due to Hurricane Irene. I therefore rescheduled my trip to coincide with New York Cycle Clubs Escape New York event: I signed up for the 100 mile sportive and booked a rental bike: a trek 1.5.

Friday started dry and I spent the day walking miles and miles, exploring the city but the rain soon arrived and during the afternoon I arrived at Central Park’s Tavern on the Green to find that the rental area had closed early due to the rain! – I needed a bike for the next day!! The local tourist information desk kindly helped me contact the rental area and after a small  bit of persuasion I was able to get someone to deliver the bike to me. The young lad gave me the bike but despite having a shed full of tools was clueless as to how to swap the flat pedals for the SPD’s I had brought with me. I didn’t fancy riding the 100 miles with SPD shoes on flat pedals so I tuned my Nokia satnav in to find the nearest bike shop: the shop were most helpful (Bicycle Renaissance) and they changed the pedals whilst I waited: I walked out the shop with a set of lights too – I could have bought more! The prices of the bikes were very tempting with reductions on already cheap prices. I walked the bike about 30 blocks back to the hostel and stored the bike in one of their rooms. I walked as I didn’t want to get my shoes wet for the next day!

It was a disturbed night at the hostel as various people came in and out all night but it was my turn to wake them up as I arose at 0540 to wash and put my Yogi top on. After collecting the bike I attached a bottle cage, put the lights on and cycled 20 blocks to the bike event registration point at about 0640. I’ve ridden in various cities such as Sydney, London and Miami but New York was quite scary! It has a constant stream of lights at every block and cars, especially the taxis, like going very fast……………..the bike shop made sure my pedal tensions were quite loose so I could unclip easily……..

After registering I was told to help myself to the bakery area for breakfast: the freshly baked muffins were American style; HUGE! and there was also really good organic coffee. I asked one of the organisers to take a photo of me in my Yogi top. There were also free samples of energy bars and drinks as well as ‘butt cream’…………. 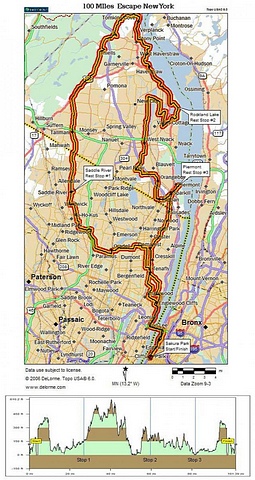 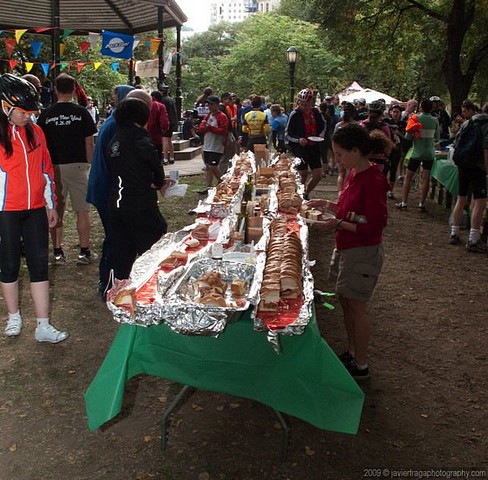 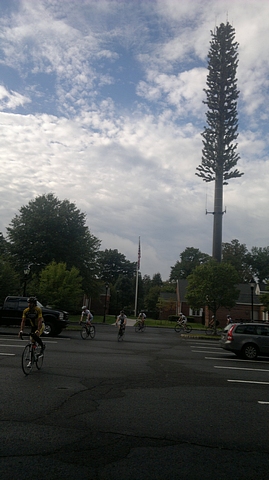 As the start time of 7am came around I searched for a group I could ride with as all I had was a huge list of directions which were useless to me as navigating out of the city would require a navigation degree! I left with a small group who turned out to be overconfident and they had decided to take a short cut!! After a few blocks I found myself with Jack; a psychiatrist who had recently started cycling and who had never accomplished 100 miles before. We agreed to complete the course together so spent the next 8 or so hours riding together……………. Without him I would have become quite lost and my not have even got outside the city or perhaps I would still be trying to find my way back now! Leaving the unfriendly NYC streets we crossed the George Washington bridge which had a real WOW factor: an amazing sight! Jack was also in a way a tour guide for me and the sights were truly amazing. The main hazard were squirrels as there seemed to be thousands of them! I also asked whether Yogi was at all offensive in America and was assured that it was not! 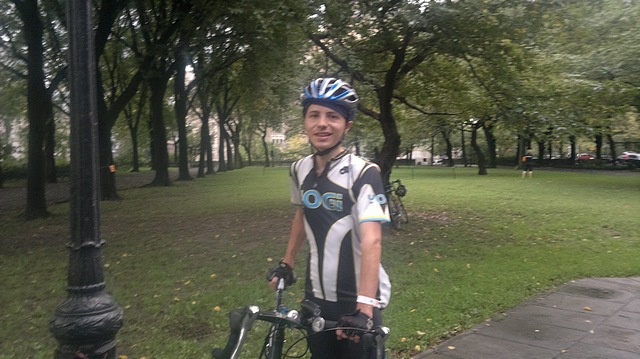 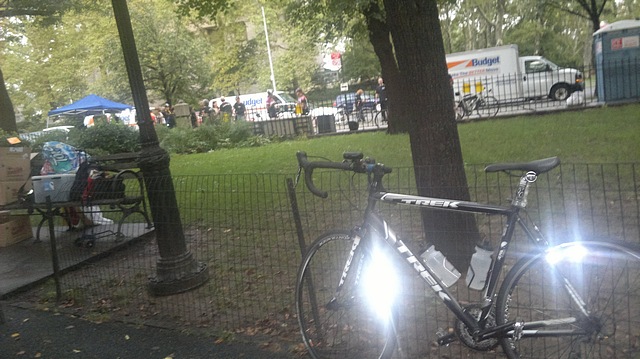 The ride was not the typical New York sights you expect to see: it covered mostly upmarket towns, beautiful countryside, hills (in Dartmoor style) and descents with blind corners and also just like in the UK, hazardous potholes and also various punctures along the route though luckily we didn’t have any mechanical troubles. The Trek was the best hire bike I’ve ever ridden – it was in good condition although at 58cm it was probably a little too big for me: I had ordered a 54cm! There was one amazing descent without any blind corners where we must have hit 50 or more mph. It was odd riding on the right rather than the left and the stop signs take a bit of getting used to. Having lived in London for a while, I knew that not everyone was a member of the “ignore the red light cycle club” though, in NYC, everyone seemed to break the law and skip through the reds! 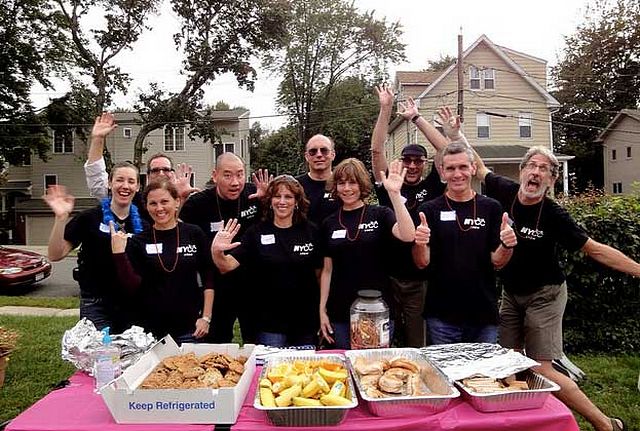 Each rest stop had a brilliant assortment of home-made produce. The sandwiches were piled up and made with fresh bread. They consisted of:

Luckily I am a PB fan! There also masses of home-made cookies, bananas chopped up with their skins on(better for carrying in pockets!) and energy food and drinks.

There was one hazardous event where we were climbing up a hill with a blind bend at the top and a sign just before the stop stating ‘no stopping permitted on the rail tracks.’ Just as the peloton reached the bend, a car stopped – on or just before the tracks and we all very nearly went into each other! Luckily we unclipped just in time. It was then quite difficult to get back on the bike due to the gradient – who would have thought that this area would be hilly like Dartmoor!

The friendliness of the other riders was brilliant: every overtake was greeted with a hello, good morning etc.  The road calls were very similar too:

2. ON YOUR LEFT (a left overtake – announced to every rider which was interesting when overtaking a huge group!)

3. SQUIRREL (well this should have been used anyway!) (One looked at the rider in front, stopped, turned around, looked at me and almost went under my wheel but thought better of it and returned to his starting point……)

The other traffic were generally quite friendly  and the roads were mostly nice and wide.

The ride ended with another crossing of the spectacular George Washington bridge followed by a (bit of a frightening) ride along an unsurfaced (bumpy) Riverside Drive back to the starting point. The traffic was very close and unfriendly (nothing like in the counties in the outskirts of NYC) – these were aggressive Saturday drivers (I suppose not too dissimilar to the Saturday Tesco crowd racing to get their frozen chips home to the freezer….) 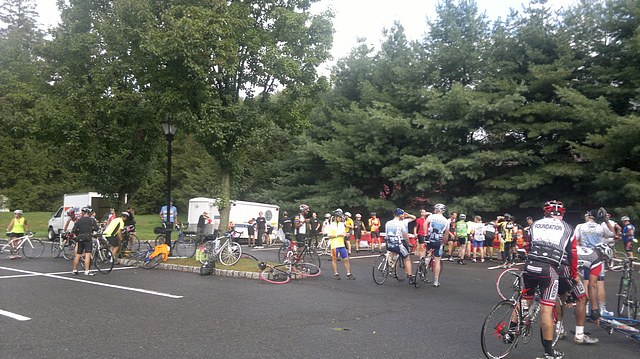 The end point had a raffle, more home-made (huge) cakes, freshly made thick baguettes, free ice cream……… I had more miles to do as had to cycle to and through Central Park: this turned out into another adventure as no mechanic was available to take off my pedals so I had to ride to deliver the bike to a site 20 minutes away. I then  had a walk through NYC complete with Yogi top, lycra, helmet and cleats…………….. A fabulous change of location to the normal Saturday ride!!! Thoroughly recommended! I found riding with someone else to be of great benefit: we started off a bit too slowly for me but it all worked out as we worked together through our strengths and weaknesses: it was the best thing to do in an unfamiliar area….

The next day was another spectacular day as I used my pilot’s licence to rent a Cessna 172 and did some circling around the Statue of Liberty – amazing! 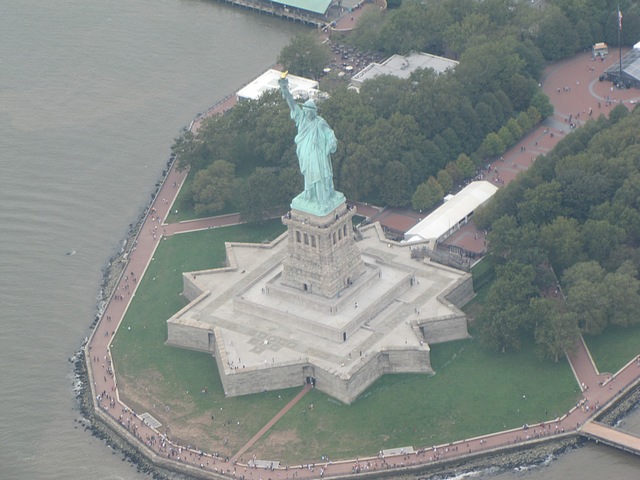