When someone suggests a 180 mile round day trip to ride your MTB most people would think you’re mad but John and Penny aided by motivating emails from Steve (Windy) managed to entice 19 riders up to Exmoor on the 10th December 2011 for some fun in the sun (well sun was promised)!

John and Penny had kindly arranged for us to be guided around foreign lands by a local MTB expert Rob from http://www.wildbike.co.uk/   and his son Fin. We convened at the National Trust car park in Horner (where we paid £3 for a natural wee as there loos was shut Tut Tut) and were briefed by Rob on the first of two killer loops. After admiring Andy Pearse’s new Kielder 100 machine which was a gleaming carbon Turner XTR loaded 29er we were off up to the top of Dunkery Beacon (Thanks Rob!).

Dunkery Beacon is 1705 feet from it base to the top and Robs planning ensured we enjoyed every foot of it by climbing straight from Horner up some lovely forest tracks interspersed with the occasional B road before all 20 of us struck the top for some magnificent panoramic views. 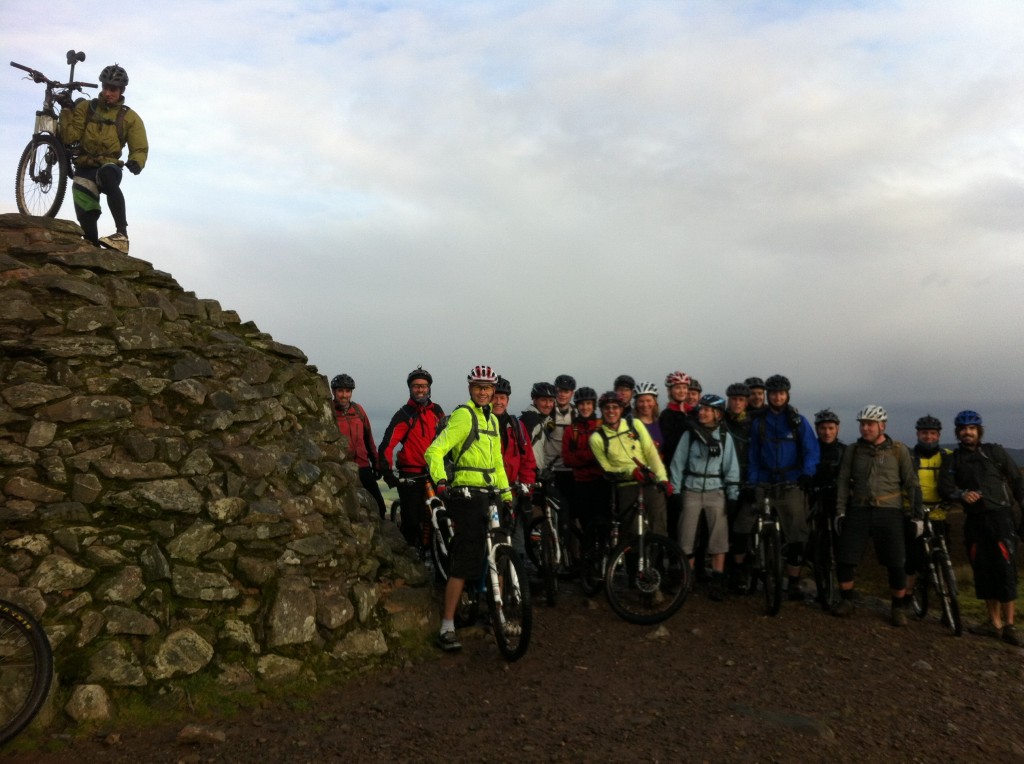 We could go no higher, well Alex could after climbing the rock cairn to the true summit and we were all looking forward to some well earned descending. After a brief from Rob about pinch punctures on the rain water gullies we set of at pace down a lovely mud oozing single track which is interspersed with rock gardens, deep gullies mud pools, drop offs and berms. Whilst descending your eyes were under a constant barrage of mud that wanted to make a beeline for your much needed eyesight!  This at least kept you focused on surviving the plummet to the next regroup spot, but not without a few victims on the way. The first of which was Keith who pinch punctured on the descent (He was warned), next Andy Powell had to ride a bucking bronco as Rob snuck past and clipped his bars (He was warned that Rob was coming past!), Lucy then decided to take a closer look at the mud by flying over her bars and finally Tim’s front tyre decided it felt depressed and needed a new tube. Despite the events we all had gravity induced grins on our faces and we were all ready for the next challenge.

The next section was less vertical but was still an amazing section of single track called Dickies which contoured around the Beacon interspersed with stream crossings, wooded clefts, open moor land and stunning views, including the Exmoor Hunt who we met on the trail (Good day to you my lord and ladies  ). In the dry I’m sure this would be one of my favourite descents in the south west and one I’m sure we will revisit soon. We regrouped for the final leg of the first killer loop in after another puncture repair, this time for Paul Minns. We were led by Finn this time, who showed us why he is winning Soggy bottoms as he darted at speed down into the woods into the section called the Mile. The trail was a mix of earth, rock drops glistening tree roots and, for added spice, the occasional deep rut with more tree roots than you could shake a stick at!  On a dry day this would be challenging descent but after some heavy rain you just had to trust in gravity as the terrain shot by and our grins got bigger.  Unfortunately for John Wilson Rudd the trust bond broke as he kissed a tree on the way down.  Thankfully no harm was done apart from some bark John took with him as a souvenir of his day on Exmoor.

We all headed back to the car park for a well earned snack and the big reveal of what stage 2 would have in store.

The first loop had been hard but rewarding and when Rob asked if we were up for another 1700 foot ascent not surprisingly a few bodies and machines decided to sit it out for the warmth of a Porlock Inn. Tim, Hannah & Morgan snuck of to a cosy fire whilst all hands were on deck to fix two new punctures for Keith! To ensure we got the maximum climbing in this time we headed down to sea level before tackling an off road ascent of Porlock Hill (Mmm warm pub beer and food sounds a smart move or does it!). The climb in truth was tough, especially after our legs had already been beasted by Rob and Finn on the brutal slopes of Dunkery Beacon.  The ascent was so long it was rumoured a YOGi Yule time log was laid as a survival technique; fortunately we managed to reach the top, with only one more puncture (Scott) and without the need for the earlier bush tucker delight.  Our bodies were beaten but we knew we were heading down and what a descent Rob and Finn had saved for us; the descent of Hawk Coombe.  The hour + up hill was soon banished from memory as 18 Mountain bikers hurtled down the longest single track descent I’ve ridden on Exmoor.  It was fantastic and I’ll happily say it beats a warm pub any day of the week! The last part was an amazing section of single track which wound its way down into a deciduous forest glen through rocky and rooty trails around trees and in and out of bubbling brooks. This was not just single track this was natural single track riding at its best.  After a regroup and another small climb the penultimate decent of the day was an all singing all dancing plummet to the valley floor. Our brakes were glowing at the bottom as were our faces. Dusk was fast approaching as we headed up the final climb of the day.  This was where Lucy showed why she has already excelled in local off road events as she sped off past us old boys as though we were standing still!  We made it back to the cars with plenty of mud on our bikes and bodies but with some classic memories to boot.

A massive thank you goes to Rob and Fin for showing us some of the best trails on Exmoor.

Full marks for all those people who made it out to Stage 3: technical pub stage in Plymouth that night, I was at home in front of the fire snoring!

PS Look out for the Exmoor Explorer Event each August if you want a good introduction to Exmoor MTB riding or if you can’t wait why not contact Rob at http://www.wildbike.co.uk/