Sorry for the mixed metaphors. I think most people find it difficult to express feelings about the run up to an Etape, the day itself, and the adjustment afterwards. It’s the sort of thing that lends itself to hyperbole and metaphor…in spades.

I want to make a helpful check-list, illustrating it with personal experience of the Etapes ’05-07

Three cyclists in our village decided, independently of each other to do the ’05 Etape-Mourenx to Pau. So, fired up about the myth of the Tour, the horror stories of the Etape, about riding in the Pyrenees. Until I decided to do it, I’d not really thought about the fitness required to do the ride. I’d done a solo End to End in 03, and a 200k Audax in 04 which was my first ride over 100miles.

So I did what everyone else seems to do; worry endlessly about the gradients, heat, altitude, the broom wagon and above all, gearing.

I simply decided to ride lots. Living in Devon helped. I rode several hilly Audaxes early in the year. I managed to ride a lot in May and June, and did our standard hilly 52 miler as often as I could, as well as a hilly 30m round trip commute. At the beginning of June I fitted in a 400k Audax which I completed in 22hrs. Towards the end of June, I took to riding some of the steeper hills on Dartmoor, included in the 200miles per week in the last fortnight. I may have done a couple of 100 milers in the six months from January in addition.

By the time 1st July came I really felt fit, but was still worried by the broom wagon, and then it happened. I rode a reliability trial of 100 miles and finished in under 6hrs, on my own. It was only then I started to believe in myself. Had there been the number of sportifs around in 05 that there are now, I’d have had a much better idea of what I was capable.

After endless calculations and concerns about the 13% section on the Aubisque, eventually I settled for what I already had, a standard double with Campags Alpine cassette 13-29.

TIP 3 – only experience can help you decide the gears you need.

We drove down to the Pyrenees taking in the team time trial at Blois, which was the day Zabriskie fell on the home straight, in yellow. Hidden by a bend 100metres away we couldn’t see what had happened, but heard the roar. The day was magic, and only went further to fuel my enthusiasm for cycling

TIP 4 – Enjoy getting there. In good time. Enjoy being there.

We had several days in the Pyrenees before the BIG DAY, and used them to ride several of the big cols-not recceing the route so much as getting used to what was to come. One day on the Tourmalet stands out. It was very hot, and cycling from Luz, I found I’d got a rhythm, and managed to push myself all the way getting to the top and recovering quite quickly.

TIP 5 – only really long hills can prepare you.

On day itself of my three rides, I don’t really remember much of the ride-just snapshots.

At the start, nothing else can be done and I generally feel calm. No explanation for that, while others around are generally very nervous.

On the ride to the first col, getting into a huge peloton, and sitting in. What a feeling

On my first ride I overcooked a turn and locked the rear brake coming down the Ichere, and ended up in the grassy verge-some people were not so lucky and went beyond the grass verge, falling tens of metres down a rocky slope.

TIP 8 – know how your kit responds to all conditions. Ride lots.

Fleeting memories of the pain of the climb up the Aubisque, being fooled into thinking the hotel four fifths of the way up, was the top, and being daunted at what had still to be done, when I realized. 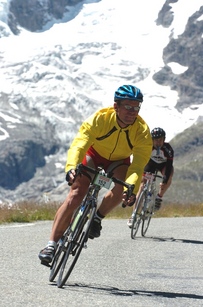 Ken Middlemiss in the Mountains

The descent of the Aubisque, not the steep top section, but the run to the finish. Huge pelotons forming and feeling good enough to jump from one to another, Following a very good rider in Euskatel kit on the flat section before the Mente in the 07 version – gaining very many minutes in the process. I saw one guy riding out of Briancon in 06 leading a peloton of 3/400 riders, and later grinding to a halt halfway up the Lauteret.

TIP 10 – prepare to ride faster than you have before.

Feeling reasonably good on the two easy climbs near the finish, while many around were walking – and the man with the hosepipe giving all a welcome shower.

The knots of people in the villages clapping, even though the leaders would have been past a couple of hours before. This support reaches its height during Paris Brest Paris, where on the return leg, you come across tents stretched across a village square, and people offering coffee and cake to all who stop, and refusing payment – all they want is for you to take a slip with their address and for you to send a postcard on your return. Old ladies and young kids wanting to do a high five with you as you go past.

Getting to the outskirts of Pau, and realizing I was going to get the silver, and starting to blub. Blubbing again in 06 near to the top of Alpe D’huez, realizing the puncture I’d had at the bottom had cost me gold, and blubbing again as I saw the crowds in the stands at the finish.

How hard 07 was. I didn’t get off the bike during the Marmotte, but I did on the Peyresourde -sacrificing a couple of minutes and 30 places for that respite. Resenting the girl that was pushed up the final ramp from spectator to spectator

Relishing the descent of the Peyresourde, straight lining many of the bends and passing many other riders.

TIP 12 – respond to your highs and lows, and to how you’re feeling.