Everyone wants to ride faster. In another article I have described VO2 Max. Now we get to – lactate threshold (LT) – the burn.

LT is highly trainable. Don’t get us wrong, natural ability still plays a huge role, both with VO2max and LT, but for almost every individual, training properly will ramp up LT.

Lactate Threshold?
Lactate is a by-product of anaerobic metabolism that, despite common misconception, is produced across all exercise intensities. In fact, even when you stand up from sitting in a chair, lactate acid is produced.

The key in sport is the balance between the rate of lactate production and lactate absorption. During light and moderate-intensity exercise, the blood concentration of lactate remains low. The body is able to absorb lactate faster than the muscle cells are producing it.

However, as exercise intensity increases, there comes a point at which lactate removal fails to keep up with the rate of lactate production. This point is referred to as the lactate threshold (LT) and spells the beginning of the end of high intensity exercise. Excessive blood lactate and hydrogen ion concentrations combine to interfere with efficient and proper muscle contraction, and as a result, power output drops, physical suffering increases and you are forced to slow down.

LT represents the highest steady-state exercising intensity an athlete can maintain for prolonged periods of time (> 30 minutes). Most coaches and sport scientists today recognize LT, or a derivative thereof, as one of the strongest predictors of endurance performance. LT also serves as a very useful measure for the determination of training zones and the overall effectiveness of training programs.

How is it measured?
LT tests typically are performed on a treadmill or bicycle ergometer. After an adequate warm-up period, the test starts at an exercise intensity corresponding to 50-60 percent of the test subject’s VO2MAX. Each stage lasts 2-6 minutes, allowing sufficient time for the subject to achieve steady-state heart rate, VO2, and lactate production. Blood samples taken towards the end of each stage determine blood lactate concentration (a simple finger prick does the trick). The workload increases in steps and the process is repeated until an obvious spike in lactate concentration occurs. Heart rate, power output or speed, and/or VO2 are recorded at each stage.

Blood lactate concentration is measured in millimoles (mM) of lactate per litre of blood (mmol/L). LT typically is expressed as a percentage of one’s VO2MAX or maximal heart rate. With the advent of power meters, various power outputs identify a riders LT and training zones. By evaluating a rider’s power output at LT, you can determine the potential for success. To be competitive in a race like the Tour de France, a male professional must be able to maintain 5-6 watts per kilogram at lactate threshold. This means that if the rider weighs 68 kg they must produce 350-400 watts while riding up the Col du Galibier for instance.

Remember the example of the two cyclists Bill and Tom from the VO2 article. Bill had a high VO2max but a moderate LT, and Tom had a moderate VO2max but a ridiculously high LT. Being the same size and weight, Tom would likely find himself victorious in a head to head race up a mountain.

It is possible to find your LT without going to a laboratory. A majority of athletes couldn’t care less what their actual LT number is. What is important is how fast and long can they ride at a given workload.

It seems that each coaching system or training book has its own specific method. Although they vary a bit, most will give you an effective idea of your LT. Some are more complicated than others. For the sake of time and simplicity, one of the easiest techniques for finding LT in the field is to use the following approach, using a heart rate monitor or power meter.

Where do you stand?
To put things in perspective, untrained individuals usually reach LT at about 60 percent of their VO2MAX. Moderately trained athletes reach LT at 65-80 percent VO2MAX. Elite endurance athletes have a very high LT relative to their VO2MAX. They are able to ride at 85-95 percent VO2MAX, and it is this ability that allows them to making a living riding bikes.

The key point in all this is the numbers change. LT is not as fixed as VO2max. Through proper training and commitment, a rider can increase the percentage of VO2max at which LT occurs.

Through years of hard work and training, a person can become a rider who is able to perform at near maximum for extended periods of time. There are numerous factors that change the rate at which lactate is produced.

What does it all mean?
LT is one of the strongest predictors of endurance performance. So, if you increase your LT, you will be able to ride faster make your friends and fellow competitors hurt. 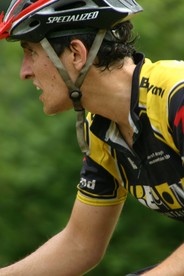