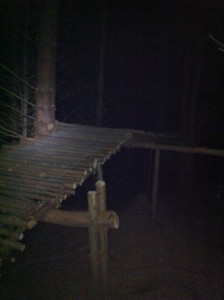 Morgan had just purchased a shinny new Yeti 575 so was looking forward to its second proper outing, the ride went well with some good long climbs and flowing fast descents, Morgan’s bike was flying on the down hills and grins were nice and wide.

The group was compact and the moors so dry that we covered the ground quicker than normal, because of that we decided to check out the new North-shore build near the hidden valley. Scott lead us up to a secluded trail hidden deep in the woods, where we discovered a very impressive build, some of the raised sections were 3 meters high with gaps and drop off’s, the North shore was so big it wasn’t worth trying at night for the first time.

Morgan, Andy and I decided we would ride up onto one section and check out the drop off, just before we rolled in the comment was made what ever you do don’t stop, unfortunately just as Morgan entered the wooden section he had to, this made him stumble to the left and step off the side of the wooden section, luckily he only fell a couple of feet but unfortunately he landed very awkwardly on a tree stump breaking his leg 🙁 unbelievably he managed to gently lay his bike down before  screaming in agony. 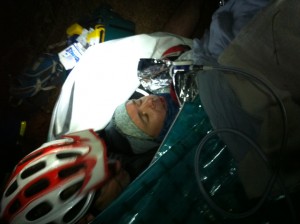 This is where the fun began!!!!!! we rang the emergency services and ask for Dartmoor Rescue Group (DMRG) as we knew it was going to be very difficult to extract Morgan as he was in extreme pain and we were situated on the side of a steep hill in the woods at night. The emergency services had not heard of DMRG so put us onto the ambulance service who sent paramedics to Burrator, they then contacted the Hazardous Area Rescue Team (HART)  who were based in Exeter, they drove down to Burrator to extract Morgan.

The up shot of this was a lot of waiting around!!!! and not knowing how to contact DMRG resulted in us all very nearly becoming hypothermic and Morgan being in a lot of unmanaged pain. We eventually got Morgan to the hospital 3hrs after the accident occurred.

The X-rays below show the extent of Morgan’s injury, broken Tib, Fib and ankle dislocation, this also shows his bravery as he did not lose control of the situation even though he was very frustrated with the delay. If you know Morgan that must have been hard as he’s well known for throwing his bike into the undergrowth when things go wrong 🙂 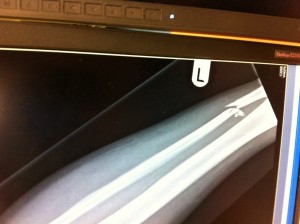 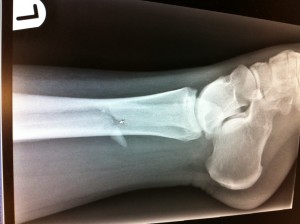 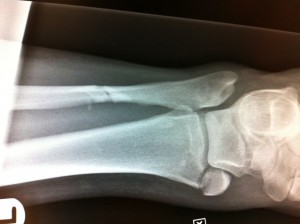 In future if you need the contact DMRG the following is the best procedure to follow: Ring the emergency services and ask for the police, say you are lost on Dartmoor and one of your party is injured this will automatically lead to DMRG being contacted, things will run smoothly from this point on. Dartmoor Rescue Group later told me they would have had medical support at  Morgan’s side within 15-20mins and he would have been at Derriford hospital within the hour.

A big thank you to the Emergency services, HART team, and the Yogi MTB guys that night, working as a team got Morgan to safety  ASAP.

I would recommend YOGI supporting the Dartmoor Rescue Group with charitable donations as you never know when you might need them.