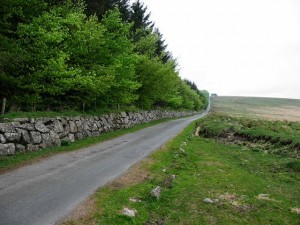 It was a lovely evening for a change so I took the decision to ride high on the moor, trying a route I had thought about but not rode before…… fingers crossed it works out???

We drove out to Holming beam which can be found at the end of the long range road close to two bridges. The sun was setting which made Dartmoor look amazing. We headed east down a hill which was so wet we all had a shock….. Although Rob had a larger shock as he went over the handle bars… at least he had a soft landing 🙂 at this point I had second thoughts?

After crossing the river we had to cross a bog  which claimed a couple of victims as they sunk up to there waists. We headed up to Beardown Tor but didn’t make it too far because Rob had a puncture. This wasn’t to be the last of the mechanicals on this ride. At the top we met a photographer capturing the fantastic sunset, unfortunately not long afterwards Andy Pearse had a seatpost malfunction and had to head back. We pressed on low and behold another issue, this time Paul Cant’s saddle slipped putting a real smile on his face, Im not supprised because it looked like he had swallowed it 🙂 I was begining to think we were going to miss last orders at this rate 🙁 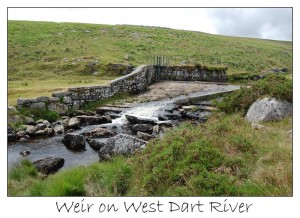 We headed down to another river crossing  this time helped by the aid of a weir, we headed up the hill and on to Wistman’s wood, where we stopped to veiw the historic engraved granite stone. This large stone is known to many as the “Druids Stone” it has an inscription which reads “By permission of H.R.H. the Prince of Wales, Wentworth Buller on Sept 16th 1866 cut down a tree near this spot. It measured 9 inches in diameter and appeared to be 168 years old.” 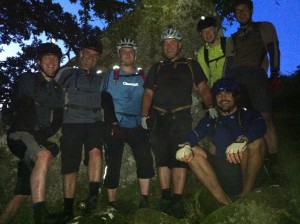 See the motley crew in front of the stone, You can just make out the engravings in the picture below. Down a fast flowing technical decent to Two Bridges, where we took the road for all of 100 meters, few was being think this was a road ride 🙂 We headed back to Beardown Tor but first had to navigate our way along a leat, which claimed a casualty!!!!!! unfortunately Morgan caught a branch which toppled him into the leat but due to his ninja like reflexes he managed to land on his feet/knee resulting a few cuts…. if you know Morgan this the norm, if he doesn’t finish a ride bleeding  then he is disappointed 🙂 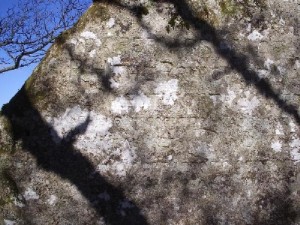 Back to the cars, where we discovered Tim had left his car key with Andy Pearse, but he was by now at home tucking into warmed up Chinese from the night before…… but like true gent he met us at the Plume of Feathers for a last orders pint.

Thanks to Rob for dropping Tim back to his car.