A smaller turn out tonight….. I’m sure it had nothing to do with the prediction of heavy rain???? 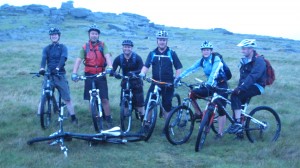 We started from the small car park just below Pew Tor, the ride took us up over Pew Tor as we meandered our way through the bridle paths? There was one small technical section that has had its fair share of victims in the past i.e. Rich but we all managed to successfully navigate our through without dabbing.

We headed for Feather Tor and down towards Vixen Tor taking the bridle path up to Merrivale Quarry, which has now had the old crane tower removed on H&S grounds, but we did notice the quarry has been fenced off to protect the falcons nesting high in the cliff face.

This is where the fun began…. or not depending on your aversion to off-road hill climbing??? we headed up the bank and over towards the leat on the east side of Middle Staple Tor… unfortunately Rob had to stop because he had pulled a muscle behind his knee, aggravating an old injury, luckily enough or resident physio Liz was with us so gave some insightful advice… yeah just keep moving, it’ll go away then!!!!! Nothing like being told to man up by a young lady to spur you on!!… all joking aside her iPhone came out and before you knew it she had booked him an appointment at the clinic…. happy days…… I think the 7 mile run, Liz did the day before had something to do with her lack of compassion… he he.

Off we went climbing quite steeply, picking our way through some difficult rocky sections until we picked up a quad bike trail, which lead us to the saddle between Roos Tor and Great Staple Tor. This area gives you a real feeling of remoteness, Tim Morgan and Andy even remarked on how they had never ridden in this area before??…… I then enlightened them to the fact we had been  in this exact point last week, but had entered from the opposite side!!…….. unbelievable, thank god I know where we’re going 🙂 We could see Rob was still in some discomfort but opted to keep it to himself…. Good effort for keeping going a lesser man would have turned back.

There was a lovely view over to Brentor church from here, although the mist had started to descend making the area feel really erie. 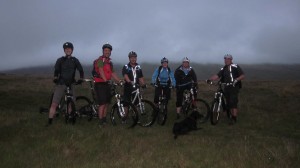 The decent off the Tor was very quick and technical, Bracken even struggled to keep up at this point, but by the time we got to Cox Tor car park everyone had a smile on their faces, “see the climbing was worth the effort”. We headed over Barn hill and down to Pew Tor, the legendary last decent had to be done, I think this is one of the best little descents on the moors…. although be warned there has been an alteration as the small river has been diverted across the route leaving a lovely little take off, once you cross the stream. Back to the cars for a quick change before heading to the pub for a pint and packet of crisps at the Rock Inn. ……..Nice 🙂