We met at Norsworthy Bridge the opposite side of Burrator to the Dam, two newbies joined us this week, Sarah and Melanie, this made the ratio between women and men even for the first time ever… 7 men and seven women, come on lets see if we can have more females on a ride soon. 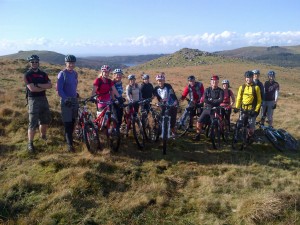 As you can see from this shot the weather was great, although it disguises the fact the terrain was hard going. We headed out of the car park on up the track towards Crazy well pool, a nice stoney climb but it warmed us up nicely.

We then crossed the river and headed towards down tor, and on up towards Combes head tor before taking the nice fasts decent back down to the river for a wet crossing over the ford.

Down to the small gully crossing we headed, where John decided he would construct a stone crossing enabling the rest of the group to cross without dabbing, the plan worked well until Roger hit it a bit too vigorously and over shot ending up going over the handlebars head first…. oh how we laughed!!!! with you I may add. Unfortunately I decided I would try to jump over the gully, and quickly realised i was going to crash into the assembled group so slammed the brakes on causing me to go over the handle bars and end up on the floor in a muddy puddle!!!! disappointingly Tim managed where I had failed and made it look so easy.

We all had something to talk about back at the pub for the customary pint and pub lunch.