This is the 1st Saturday of the month fun ride, it is designed to encourage as many new riders to MTB as possible to go out and give it a go. If however no new riders are present we  make it that little bit harder, so don’t let it put you off we will cater for all abilities. Due to the success of these rides we are now running a 3rd Saturday of the month fun ride whilst the demand is there.

The route took us around the back of Cox Tor after Bracken had caused a slight issue  when crossing the road, two older ladies couldn’t help but tell me how bad I was for allowing my dog to run on the moors off a lead…. whatever!!!! 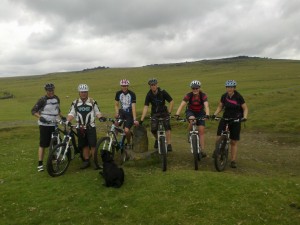 We descended down the steep track which lead to a small wooden bridge crossing the river, we all survived un scathed… bonus 🙂 over the river and up the hill, through the gate which leads to a bridle path through a field, we stopped here to catch our breath but unfortunately when we went to start John discovered he had a puncture, he could have been repairing that rather playing with Bracken 🙁 only joking it gave us time to sort Alice’s gears out as they were jumping all over the place.

On up to Stephen’s Grave! “This is the grave of John Stephens who lived in Peter Tavey, John committed suicide around October 1762 and like most suicides at the time he was buried in unhallowed ground, suicides were usually buried at cross roads or at the farthest bounds of the parish”. It’s a handy leaning post in the picture above for John and Tom….. 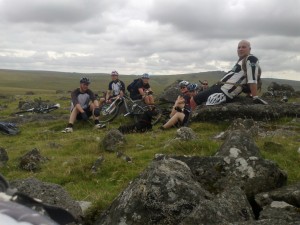 At this point I decided we would ver left and head up over White Tor where we had an impromptu food stop, luckily enough John brought a big bag of sweets…. Just what the doctor ordered 🙂 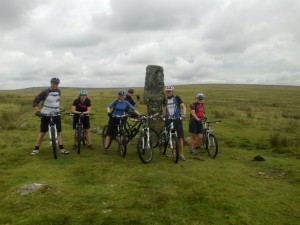 From White Tor we picked up a sheep track which lead us to the standing stone situated in the firing range zone, no red flags thank god for that 🙂

We headed down the hill and picked up a lovely sheep track which we rode a couple of Thursdays ago, this eventually crossed the stream twice and headed up to Roos Tor, that sounds easy but it was a slog as we rode through the grass with no visible signs of a trail, eventually we picked a track up which lead to the top of the Tor. Where we celebrated by hanging off the range flag pole…. see below 🙂 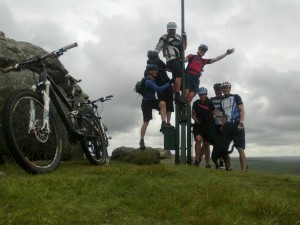 Whist John was posing on top of a rock (see picture below) he foolishly handed his full suspension carbon bike down to Alice, unbeknown to him the only reason she offered was so she could ride off into the distance leaving him with a hard tail and a flat tyre. Once John caught up we headed down over the Staple Tors to a lovely decent which meandered its way down through the Bracken to a small stream………….. John couldn’t believe it he had another puncture, this time a pinch from the rapid descent, not bad three in one ride although only two on his bike, it’s weird sometimes they come in three’s 😉 Back to the cars to get changed, at this point Alice informed us she was dropped off this morning so had to ride ride back to Walkhampton, lucky enough the short cut from Merrivale was an option so off she went. 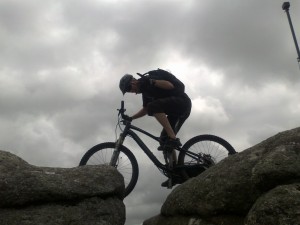 Tom enjoyed the ride so much he informed us he was going to ride back to the top of Cox Tor for one final decent. It didn’t take long before we all decided to give it a go, although Ronnie kindly offered to stay back and take Bracken for a walk up the hill. We eventually made it to the top with a small detour around the lower valley crossing the stream a few times……. “you cant have a `windy ride without getting your feet wet” 🙂 Unfortunately the main track up to the Tor was covered in Grockels so we had to find a smaller trail off to the left, this turned out to be a real find, so will be used next time we ride in this area.

Seeing as though it’s a Saturday ride it seemed only right to head to the Burrator Inn for a spot of lunch and pint, where we were joined by Alice for a fleeting moment before she was off to walk Otto her dog….. Does she ever stop???? On On Windy.