A large group of 18 riders committed to a trip to the Quantocks namely: 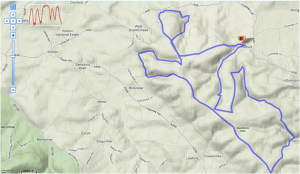 After recently becoming qualified as a  MTB Trail Leader, I was told ideally you should recce any ride before hand to identify the risks???….. Paul Minns and I had the arduous task of  doing this route two weeks before 🙂 And yes there were risks but no more than any other MTB ride 🙂 We were endeavouring to complete a 22 mile MBR killer Loop, don’t let the mileage deceive you, the terrain in the Quantocks is severe!!!!!

The car share was more complicated than expected because at the last minute Chris Grigg unfortunately couldn’t join us due to an illness, but Paul kindly stepped in allowing us to fill his newly completed van conversion with 8 bikes. We all headed off in convoy to the start point in the small village of Holford on the North side of the Quantocks hills.

It was great that James Watkins could join us after moving to Braunton on the north coast of devon, and Ben Cobbett who was back from his stint at sea, long time no see.

We headed up the first climb of many from Holford to the trig point at the top of the hills, we regrouped ready for the first downhill of the day, “Smith’s Combe” This decent starts on a grassy knoll and heads down into a small patch of woodland before you hit the first stream crossing, this is followed by sweet single track crossing the stream multiple times. At the bottom we regrouped with grins from ear to ear. The only casualty on this descent was Tim:) he had somehow gone off track and ended up in the undergrowth, grazing his cheek and cutting his knuckles.

This was the theme for the day, fantastic descents followed by killer climbs that seemed to go on forever!!!!

After tracking back up to the Trig stone we headed over to “Weacombe” this was another amazing decent followed by a long climb, once we had managed to gain the height back we rode cross-country over to Triscombe and Greatwood, where we met three downhillers, it would be rude not to follow them into woods:) This was an awesome little trail winding through the woods with some nice lumps and jumps, some of these are a bit hairy I can tell ya!!!!!!! never the less we all survived with big grins. As usual this meant we had to track back up the hill to retrace our steps. I decided it made more sense to follow the road  until the forest road which enabled us to gain the height more gradually up to “Dead Woman’s Ditch”…. yes the name is real, the mind boggles??????

Once we made our way back over to the North side of the hills we headed down the final descent “Hodders Combe” which lead back to the cars….. the ride was 22 miles long and full of fun, thanks to everyone for making the effort.

On the way home we stopped off at Nether Stowey for the obligatory bar meal and well earned pint.

I have to say what a ride by Penny! hats off to you this was a challenging ride and you coped admirably.