With our usual high number of YOGi entries for this weekend’s Dartmoor Classic, the small turnout at B&Q was to be expected. Eight of us set out on today’s 14 adventure. A nice round number and, to be honest, I chose a very easy week to lead a ride!

I decided on one of my favourite routes. The last time I led it the weather turned out so bad that only a handful of us completed the whole route! This time the weather forecast could have easily gone that way too but luckily it didn’t. The strong winds would be in our favour for the first half (but against us thereafter) and there was a chance of showers. 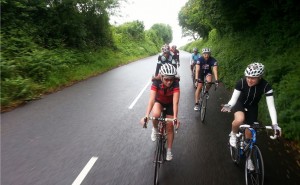 “…but honestly? What exactly do they make inner tubes out of these days?”

The day wasn’t without its share of mechanical incidents starting, before we even set off, with Holly going through four inner tubes! Four! We left the car park and headed up to Ivybrige via Plympton and Lee Mill. Our first spell of rain came just before Lee Mill and we stopped to put on waterproofs. Those who chanced not to put them on (me included) got it right as the rain stopped soon after!

En route to Ivybridge, Holly used up her fifth inner tube! Who even owns five spare inner tubes – let alone carries them?? This is a record and needs to be investigated further. 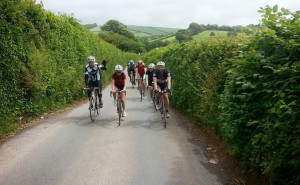 After Ivybridge the route went like this: Wrangaton, California Cross, Gara Bridge, Morleigh. At the Totnes/Kingsbridge road we turned right and then left, taking the back roads towards Kingsbridge. These are some of my favourite roads. They’re quiet and take you downwards to the Bowcombe Creek past some idyllic houses and cottages. Most people on first riding this route expect the downward roads to reward you with the equivalent uphill but are pleasantly surprised to find themselves on the main Kingsbridge to Slapton road at New Bridge.

From New Bridge we were assisted by the tailwinds and the next six miles to Torcross passed very quickly. Here we briefly took in the sea views before rushing to the counter in the Boat House Restaurant to order food and drink. 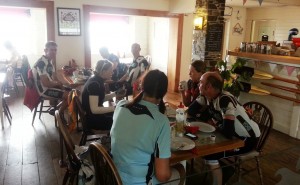 After we ticked off the obligatory eating, drinking and gossiping elements of the ride we had only to complete the riding part. This meant continuing along Slapton Ley (with the still very nice tailwind) and up the hill to Strete, looking back at the stunning views all the way up (with a bit of looking where we were going too!).

Left at Strete and eventually left again onto the main Dartmouth road (near Woodlands). Here we were introduced to the the headwind that we loved so much as a tailwind. But we’ve all ridden in much worse and were soon at Morleigh again. We then took the Dipford Road which was fairly sheltered from the wind but not the rain! Here the decision to put our jackets on was a sensible one as this rain followed us all the way to Marley Head.

Just before Marley Head two things happened – we lost Kim and then John (Sawer)’s chain broke. Luckily a phone call from Kim solved one of those problems but it took several attempts to fix John’s chain – all while it was raining.

At Marley Head we regrouped (minus Kim who’d stopped to take his jacket off and, not noticing that we’d taken a turning, carried straight on to Avonwick) and we then continued onward via South Brent, Ivybridge and Lee Mill. Shortly after Lee Mill, John (Ambrose) decided that we should have a sixth change of inner tube and managed to puncture. He gallantly told us all to leave him behind but we couldn’t leave a man down and so we all (minus Kim who was already home) watched him fix it and rode back into Plympton together.

I really enjoyed today’s ride. I’m biased when I say I liked the route but the company made it all the better. We managed about 67 miles (B&Q to B&Q) and an average of just over 15mph. Thanks to the seven of you for your company and for the good group riding.

Here are some photos of the day: 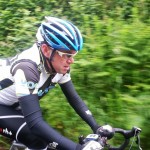 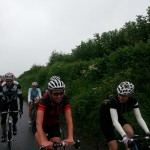 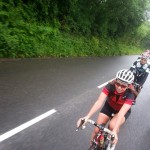 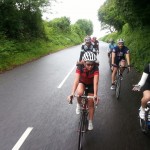 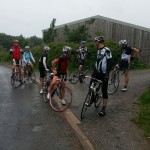 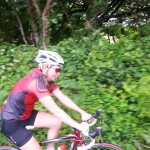 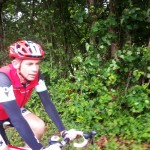 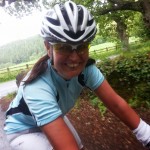 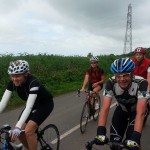 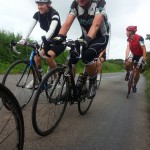 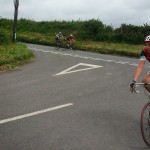 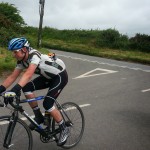 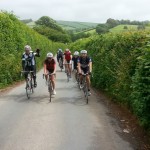 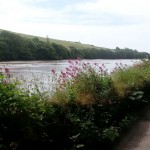 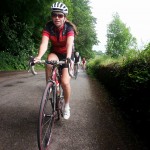 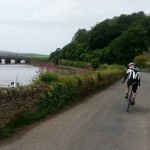 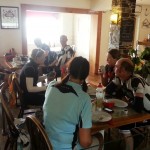 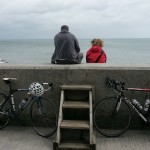 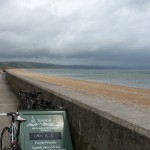 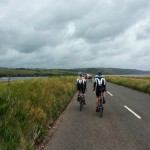 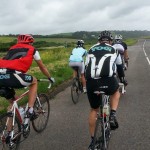 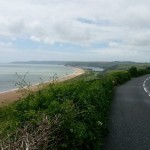 And, finally, following the discussions on my “ass-saver”, here is André Greipel sporting a red “ass-saver”: 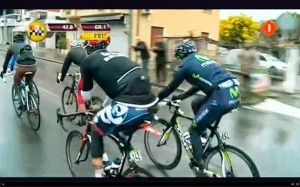