Firstly, we can’t guarantee a formal ride on every Sunday as, like the Saturday Rides, they rely on someone to volunteer as leader. I’m happy to lead on the Sundays that I’m available but I also like to ride on Saturdays and can’t always do both. If anyone would like to volunteer to lead one then please let us know and we’ll post it!

On arrival at B&Q I realised that the later start time of 10:00 was not necessarily a good thing! It was incredibly hot down there already and I’d turned up early for a change too so had to swelter away until Holly turned up with yet another tyre problem to take my mind off the heat! 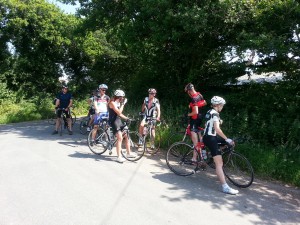 YOGi’s lurking in the shadows

It was a relief to get moving and feel some air moving past us. The route took us out through Plympton, Lee Mill and Ivybridge to Wrangaton. Here we started to feel the heat again as we entered the “sun-trap” lanes towards California Cross and that first long “proper” hill of the day.

Once at California Cross we achieved our full compliment when Kerry joined us. The group now consisted of 12 YOGi’s: Myself, Holly Russell, Kim Wiltshire, Dave Skinner, Dave Thorogood, Dave Liddall, Simon Pope, Kerry Nadin, Paul Brindley, Andy Powell, Mike (sorry I didn’t get your last name) and Chris Richards (newbie). Welcome Chris! (Please note that, at head counts of around 12, we are nearing the limit of my ability to remember who was there!)

At California Cross we turned left into the mostly shaded road that leads down to the start of the Gara Bridge climb. Thankfully the climb up the other side was also mostly shaded and the worse bit was the regroup at the top where we were exposed to the sun again. After much mopping of brows we rolled on slowly through Morleigh to the junction with the A381 where we turned right towards Kingsbridge.

The Kingsbridge road is a nice fast rolling road and allowed us to forget the heat as the air flowed over us and the group managed to maintain a nice steady pace for about five miles. This came to an end when we turned right onto the descent that leads down into the valley below Loddiswell and to our cafe stop of the day at the Avon Mill. Once stationary again we were hit by the heat!

Huddling under the shade of the umbrellas rather than basking in the sun, we refuelled and swapped gossip. I don’t think anyone was in a particular hurry to make the first move to leave but eventually somebody had to!

Off again up the hill to Loddiswell and the road towards California Cross. At California Cross we retraced our route back to the Erme valley noting that the tarmac that we’d ridden on earlier in the day was now melted and our tyres started to make a different sound due to the tackiness of the tar! (I later noted that my Garmin had recorded an average temperature of 30.5C!

Dave S bid his farewell at the top of the Erme Valley and after a quick descent down to Ermington we also said goodbye to Kerry before continuing back to Plymouth via Ivybridge, Lee Mill and Plympton.

I’ve cycled nearly every day since getting rid of my car in February and this ride was definitely the hottest so far (and that includes a week in Mallorca!). Thanks to everyone for your company it was a great ride.