Tour of Britain Returns to Dartmoor

12 lucky local cyclists including YOGi’s very own Andy Powell joined Rapha and Motorpoint to trial part of The Tour of Britain stage to be held on Thursday 15 September. This stage starts in Exeter and covers 110 miles (180 km) of the county before finishing in Exmouth. Dartmoor features heavily in the stage and could prove to be a deciding factor in this year’s Tour as the 96 world class riders will have to tackle three Skoda King of the Mountains climbs at Haytor, Coffin Stone and Huccaby Tor.

With the mist shrouding Haytor car park we set off on a 30 mile circular route via Widecombe, Ponsworthy, Dartmeet, Two Bridges, Postbridge, Moretonhampstead, Bovey Tracey and then back to Haytor! 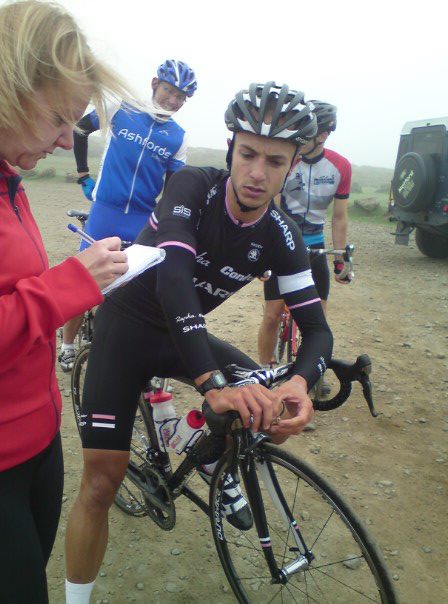 Jonathan from Rapha talks to press

Andy Powell says “It was a buzz riding with Rapha Condor Sharp’s Jonathan Tiernan-Locke, from Derriford Plymouth, and Motorpoint Pro Cycling Team’s Somerset-based rider Marcin Biablocki. Unfortunately I didn’t get the yellow jersey and had to settle with the Lantern Rouge prize as I didn’t want to show the professionals up!”

This looks to be another fantastic cycling coup for the Southwest and it would be good to get a crowd of YOGi’s again on the slopes of the big climbs. 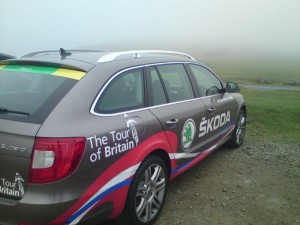 3 Responses to Tour of Britain Returns to Dartmoor