What an amazing day for mountain biking yesterday. The sun was out and the trails were dry and dusty…… really makes a change 😀 We started the ride from Norsworthy Bridge and headed out to Nuns Cross via Drakes Leat, bit of a tricky trail, especially for Rob who went ASS over T*T. After a quick regroup just below Nuns Cross farm…. pic below: 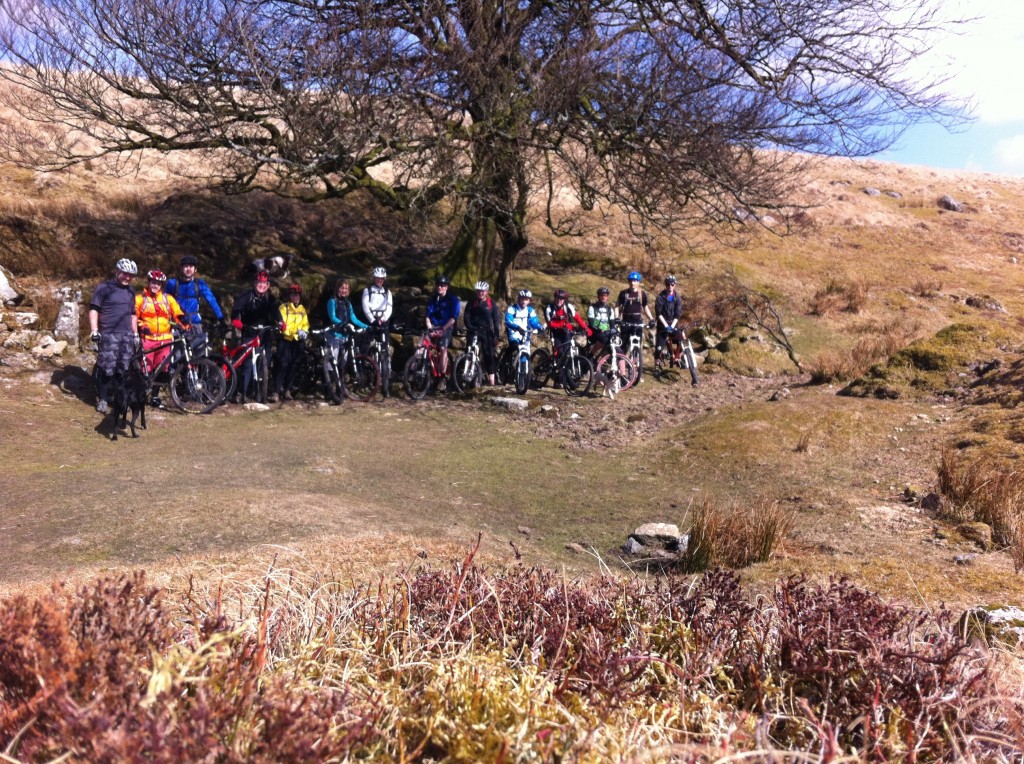 We then headed out beyond the farm deep into the moor. This area is usually unridable but seeing as though it was so dry we gave it a go. After a fair slog across open moor we descended into Evilcombe where Rob went over the bars again!!!!! At this point he figured it must have something to do with his forks?????? and added another 20psi. The route into Evilcombe had some challenging steep drops, which I have to say Penny managed skilfully. After picking up the gully below Hare Tor we followed a fast flowing sheep trail down past the standing stones.

The climb back up to Eylesbarrow mine was made memorable by a brazen badger out foraging at midday. Bracken decided it would be good to give chase and they both scampered off to his set. Needless to say the badger got away unharmed 😀 We took the opportunity to catch some sun rays as it was so warm…. also gave Marcin a chance to catch up, as he was beginning to feel the pain (but hats off to him, he arrived with a smile on his face and a steely reserve to keep going). Once we made the top of the climb we descended down towards Combeshead Tor… such a good trail – fast, twitchy and flowing. Ben was loving it but overcooked a corner ending up with a double blow out…….. no worries though, this gave us more time to lay in the sun and soak up the rays!!!!!

The last two descents of the day, firstly we dropped from Combeshead tor………. I think this is one of the best natural descents on the moors!!!!!! Anders had a near miss though, he managed to end up in the cluster of rocks at the bottom of the descent, this has also caught Wayne and I out in the past  but luckily Anders came away unscathed. Last BIG climb up to Cuckoo Rock followed by the final descent down to the track at Deancombe farm….. the second best natural descent on the moors, and back to the cars, joining the hordes of emits stuffing their faces with ice-cream. All in all a bladdy good day out…… shattered now!!!!!!!! on on Windy.