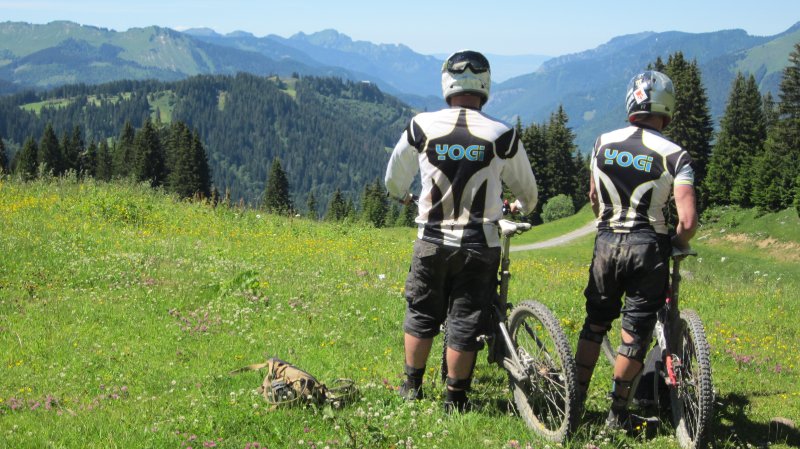 We all look forward to a holiday but when it involves mountain, riding, friends and a great location you know you have a winning recipe for something special. Planning for the trip commenced in the autumn of 2010 to ensure we all had enough time to get a leave pass from our better halves and to give plenty of time to wind up our riding friends who were staying at home. By the departure date our numbers had swelled to 14 riders including:

We would be joined later in the trip by:

Adam and Simon from Certini who were acting as press peeps for the Passporte du Soleil event. 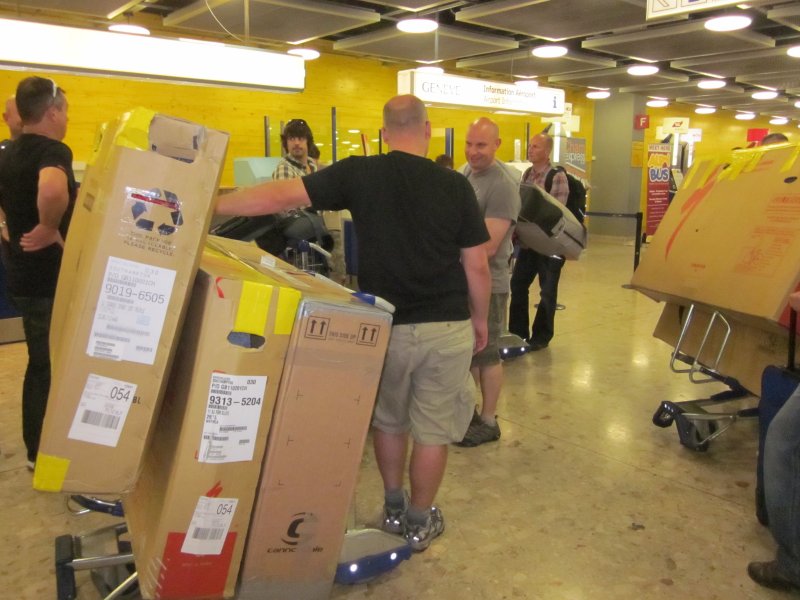 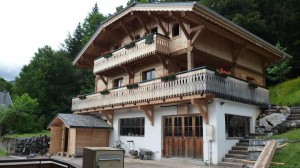 Once the bikes were collected from the airport and thankfully assembled in one piece at our mountain chalet there was just enough time to catch the Pleney bubble chairlift up to 1500m for a quick descent of the down hill run perched in the clouds at the top. With huge grins on our faces we rode uphill without effort in our bubble chariots from the foot of the mountain to the lift station at the top to take our first descent down a graded downhill black run….nothing like jumping in at the deep end!

The start of the ride takes you through an event start hut and straight into a section of single track which has a series of rollers and a nice drop-off before you head into the trees. The mountain was a bit slippery thanks to a late evening shower but the trail was soon giving us all huge grins as we wound our way through some technical sections through more trees and jumps and then back out into the open all without the need to pedal for over 20 minutes! The terrain was certainly different to the moors and it was surprising how hard it was to ride downhill for such a sustained period of time. Thankfully there were no spills or injuries as we reached the valley floor and decided it was time to head back to the Chalet for our first cooked meal of the trip. Prior planning by Windy though had ensured our return route would take us back past Bar Robinson the traditional post ride bar where the Mutzig beer is cold and of unknown strength! 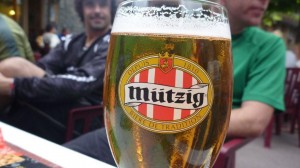 After more than the recommended intake of the intoxicating liquid we headed back to our hosts Gill and Jono who had cooked us the first of many magnificent 3 course meals with glasses and glasses of free wine….you could easily get use to this lifestyle! 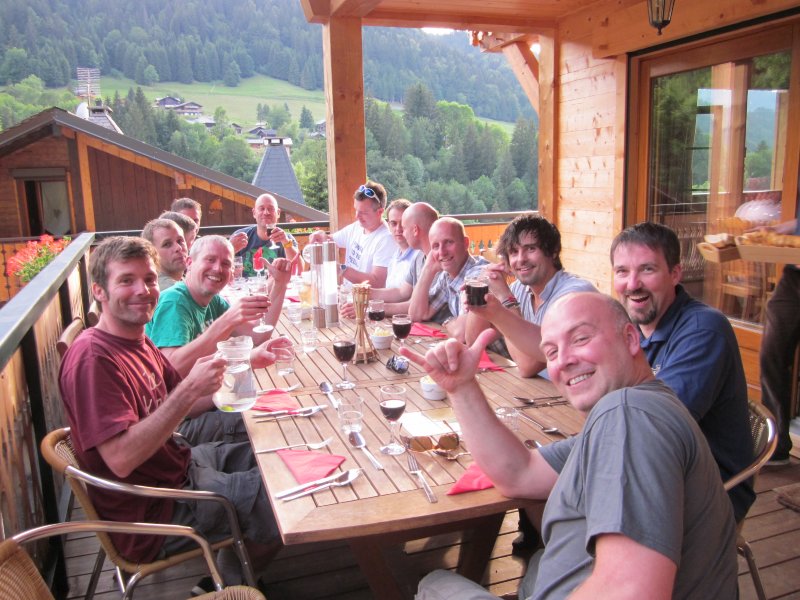 The following morning the majority of our heads were paying for our exuberance the night before but a full breakfast spread from our hosts soon but our bodies back together and we were keen to get back out into the Mountains. It was decided that our first day out in the hills should be one of riding within ourselves and acquainting ourselves with the terrain before we hit the bigger challenges which were planned later on in the trip (remember that statement please). We were soon up high again and heading over to the Les Gets side of the mountain range via more fabulous single track. The riding was a lot trickier today as during the night it had rained heavily and the trail was more moor-like with boggy sections to avoid. The route down into Les Gets is a classic you head down along single track for several miles and are eventually deposited on a downhill red run with huge graded berms which you can hug up high before dropping down again. The group was well spread out now as we headed towards a permanent double jump structure of mini car size which most of us rode around but our first time Alpinist Paul Minns took cleanly with some style and I along with others thought we’d have a bit of that next time we came down. It was time to knock it back a bit before testosterone got 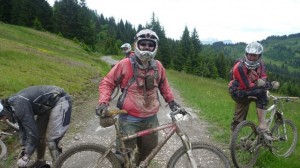 us in trouble. We headed back up to the mountain top by a lovely chair lift and hit a series of green and blue runs which zigzagged down the mountain side and allowed us to get used to the conditions. I for one was having trouble staying up as my tyres washed out in the mud which had pooled under the trees. Whilst the grades were green and blue the tree sections were up there with some of the hardest riding I’ve done on the moors thanks to the hundreds of exposed slippery roots which carpeted the floor just waiting to bite you.

Back at the base we headed up again and decided that a red run may actually be safer as it was out in the open and it appeared to be drying out nicely. As we neared the top of the chair lift we noticed the trail builder had constructed a monster double jump about the length of a bus and about 10ft high, not surprisingly we saw no one taking it on! After a rest it was time to tackle the red graded downhill track on our cross-country bikes. Refreshed from our short break we sped down the first bend and we were already at the foot of the massive jump we had spotted on our way. Sensibly the group rode around the base but then one of our riders broke out of the chicken line and hit the jump at full sped……wow that’s gutsy stuff I was thinking as Paul Minns was a good 20ft off the floor and heading for the end of the jump…….but his entry speed was just not quite enough as his front wheel cased the top of the table top and he was spat out over the handle bars bouncing on his head as he slid down the side of face of the jump to end in a still heap…. There was small group of YOGis behind Paul who Jumped off their bikes to check on the still form of Paul, thankfully there were sounds and sight of breathing but Paul was out cold. Paul can you hear me do you know where you are…nothing then a series of deep snores and finally his eyes opened and the relief in our group was palpable. Fortunately Paul’s thick skull and the fact we were all wearing full face helmets limited the damage but we were still a little worried as Paul’s short-term memory had temporarily deserted him. Rob and Morgan took charge and Paul took a trip down in the back of a fire truck for a precautionary check up at the GPs to ensure his good humour was in tact. 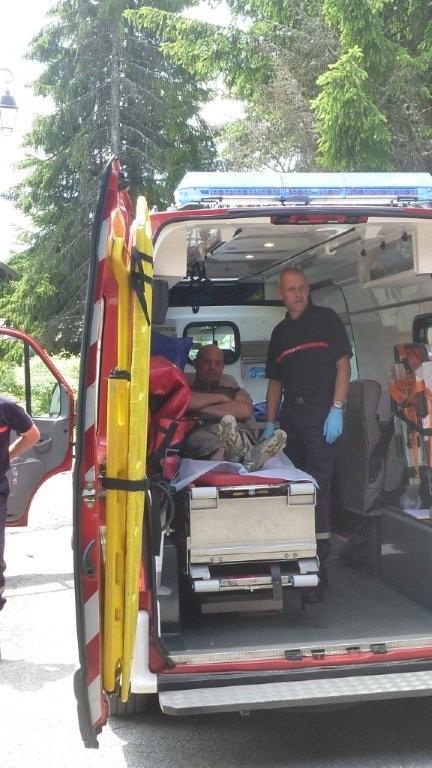 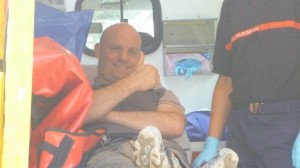 Thankfully Paul was fine apart from a dent in his pocket from the GP (it’s not free in France!) and a recommended trip to the hospital for a brain scan (good luck there). Andy Pyke kindly agreed to take Paul to Thoron on Lake Geneva for a check up whilst we had lunch and had a rethink of what we meant by getting acquainted with the Mountains!

We decided to get back to our cross-country roots and did a classic high mountain loop whilst Han took time out to get some top tips on descending from a local downhiller. The ride even included some uphill where we had no artificial aids for a change, the riding was tough with our full face helmets as we contoured around a hanging valley but the views and the final descent to Les Gets along an old river bed was first class.

After a roller coaster day we headed back from Les Gets to Morzine down the road at high-speed where the survivors awarded themselves a Mutzig before we headed back for more fine wine and food. Some people that night hit the town in style to the wee hours in the morning our numbers were down at the breakfast table in the morning as the revellers stayed in bed nursing sore heads whilst the rest of us pondered what we wanted to do before the main event on Friday.

Thursday was an enforced rest day for some whilst the majority of us headed back up the mountain in overcast skies to test ourselves again. We were joined by Adam and Simon for a few days with Simon showing off a nice Demon 29er an interesting choice for the Mountains. Everyone appeared to be in the zone but whilst I lead the third descent down the Pleney downhill track there was a sound of crashing bikes as we left a series of board walks. After slowing down to see what was what it was apparent that Morgan and Keith’s bikes had joined themselves at the hip. Following further analysis Keith’s wheel was no longer round and it looked like a visit to the bike shop at the bottom was in order to see a French man rub his hands together whilst opening his cash register! Later that day with Keith sporting a new wheel with a nice red hub we were back under sunny skies and bombing down the red run at Les Gets which had taken Paul out (this time we all avoided the big jump). The dry conditions were certainly making it a fun experience as a line of YOGis plummeted at speed down the mountain. Our confidence was back and we even took on a medium size gap jump as we soaked up the bumps and turns as we descended to the bottom. After lunch we went our separate ways as some wanted to conserve their bodies for the 80k event and others wanted to get a few more descents in.

After the customary beer at Bar Robinsons we headed back to the Chalet to be greeted by a YOGi mountain bike Committee meeting which was in full swing in the hot tub! 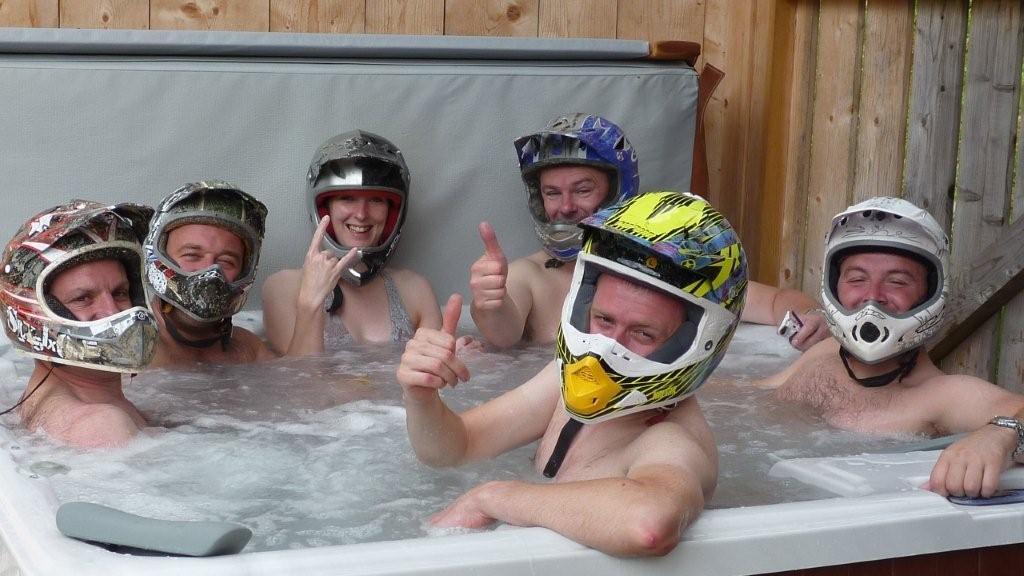 After more fantastic restaurant class food and wine we fettled our bikes and got ourselves ready for the Pass Porte du Soleil MBR event which was going test our skills and fitness as it required us to ride 80km of mountain trials in one day heading through France and Switzerland.

Two days down one near miss, great riding and still not a peep from Robbie!

…….More on this event later in the week