Panoramic, Fantasticable and Monkeys Ass!! now theres a few good names for ya???

Day 5: What a day the sun was shining and the trails were dry and dusty, we all felt gutted for Andy Powell as he was going to miss out on the rest of the holiday…….. well so we thought????? Andy was determined not to let this little flesh wound ruin his holiday, so planned a nice long walk with Kerry and Andy Ball, they headed up the Le Plenney bubble and walked over the golf course….. this is something to behold, a golf course purched at the top of a mountain, this is by no means a little stroll, they headed over to Les Gets and out to neon taking in the waterfalls on the decent back to the valley, Andy’s hand started to throb after a while so he had to keep dunking it in the water troughs that are handily placed along the way.

Wind, Morgan, Paul, Matt, Keith, Robbie, Scott, Andy Pryke and Hannah (see girls can do it:-) headed up the Super Morzine bubble and rode cross-country to Linderett before heading up the chair lift to ride the Panoramic trail for the first time, this loop was added last year and what a gem, bumps jumps and kickers that flowed so well, you couldn’t help but smile. Around the corner and down we went table tops berms a plenty, everyone seemed to get dialled in  on this decent and the confidence began to grow. I took a skinny granite drop off I had spotted last year but had to come to an abrupt stop as someone had ridden off the trail and down a really steep bank……. Morgan are you alright? yeah true to form Morgan was smiling but it could have been so much worse!!!!

A group of us decided we were going to give the Fantasticble a go, we paid our money and headed up the chair lift to the hut situated at the top of the mountain. Rather disconcertingly we were weighed and asked to put a silly hair net on…… ridiculous as at least three of us are bold as a coot:-) We found out later the reason for weighing was to determine whether you needed a drone shoot to slow you down or not. Into the harness and collect your pulley rig. Standing at the edge of the drop trussed up like a chicken in fetching helmet and goggles, great!!!! It’s then you realise FANTASTICABLE consists of two cable stretched across two valleys, each 1Km long and 900m high, top speed 100Kmh. What an adrenaline rush, we were all buzzin’.

Morgan, Andy Ball, and Matt however decided this wasn’t their cup of tea so carried on down to Chattel to take in the North shore, this reinvigorated Morgan and he got his mojo back after the earlier crash.

By the time we all met up for the journey home, time was marching on, so it was either down to Linderett and through the goat village via the road back to Morzine, or we could try the legendary Monkeys ass???? needless to say when I said this was supposed to be one of the longest single alpine single tracks around the general consensus was…. need I say more??

Back along the Panoramic we went but this time on the corner before the decent we headed off left into the undergrowth and down an amazing techie single track, if this was it I was happy already? we popped out by a mountain restaurant and had to make a decision? was it down the fire road or off into the single track ahead which seemed to be heading into really steep terrain……… straight ahead it was then! this was amazing single track no more than 7″ wide that twisted its way along the side of a mountain until we hit a sharp left hand bend. We regrouped at this stage and took in the surroundings, they were out of this world!!!!!

The views were so stunning we decided to put the head cam on and take some footage, I positioned myself on the bank as the group rode by in a train meandering down the mountain awesome, only a couple sounds in a could hear the usual cry from Godders as he yet again fell of the side of the track and tumbled out of view. The trail got progressively steeper until we hit the tree line, where we were confronted with a DANGER AVALANCHE area, little did we know this is where the fun began!!!!! the train then rapidly dropped until we were hanging off the back of the saddles just to stay on, the brakes were smoking and we were boiling…. what fun.

Down through the trees and into the leaf litter, this was treacherous riding and PAUL even managed to lose his bike over the edge, there were some funny looks at this stage, and i have to admit I was beginning to wonder if I had gone the wrong way? well we made it to the bottom and popped out by the lake….. made it safe and sound!!!

The ride back to town was awash with stories of crashes and amazing views…. back to the chalet as quick as possible, we had booked a meal in town and the guys were waiting for us…. no change there then? The food was amazing but we wont go into the cost….. needless to say the chalet food is amazingly well priced compared to eating out… Thanks Jill and Jono of Riders refuge you’re great:-) 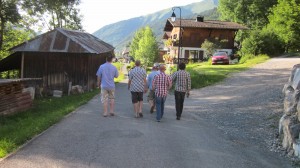 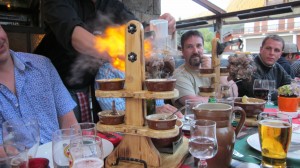 More instalments to come…. so watch this space????