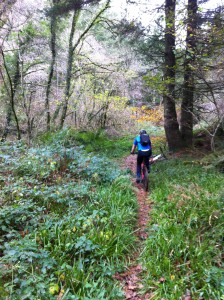 We all met at 10am in Newbridge car park for the XMAS MTB Fun/Adventure Ride in the Dart valley; well most of us, Colin just made it as he had been waiting at Two Bridges and Lucy G only met us because Colin delayed our departure!  Everyone managed to get a space in the car park despite there being hundreds of canoeists, as it is the start of the “Loop” run on the River Dart.  We had a good turn out with many of the regular fun riders plus some of the regular Thursday night riders.  Those present were: Andy Powell, Andy Pearce, Ronnie 29er, Tim Peters, John Allan, Penny Allan, Lucy Allan, Alex and Justin, Dave Budd and Morgan Hanson, Magura Dave and we welcomed two newcomers Lucy Goldsmith and Tony ( who survived very well as it was a lot longer than our normal fun ride).

We started by following a track next to the River Dart going downstream, and then gently meandering up a forest track complete with Holly Trees especially for Christmas, through various woods and tracks to the highest point of the ride.   Alex was the only unlucky one to get a puncture at this stage, and produced his puncture repair kit.  It was way too cold for that so after lending him an inner tube; and with a helping hand from Andy P. he 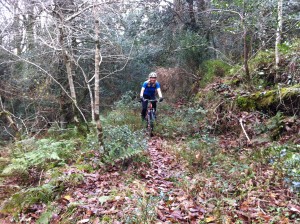 was ready for action in 2 minutes.  It was good to have some uphill to warm us up as it was such a cold day.   When we got to the top of Corndon Down we had a ferocious hail storm (Arranged specially for the XMAS Ride 🙂 – Editor), which contributed to John going flying over the handle bars (twice) and nobody really being able to see where they were going.  At each regrouping point we had a group huddle behind the rocks, and then set off quickly once everyone had arrived.  We then had really steep descent from Yar Tor down into Dartmeet carpark, where we had well deserved snacks that kept on appearing out of peoples rucksacks and were generously shared around (Delicious shortbread Justine and Yummy mince Pies from Ronnie & Penny – thank you ). 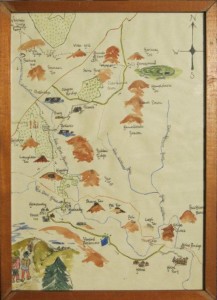 We then followed the track and the road up YarTor Down (should be called yar Tor up not down!), followed by a very steep descent and then a traverse around Sharp Tor to the Bel Tor.  Finally, we had a beautiful long descent on Dr Blackhalls Drive down into Newbridge Car park with big grins on our faces, and some of us went to the pub for a well-earned very late lunch.

A big thank you to John for leading the ride.  It was good to try somewhere different.  Also thank you to all those who turned up and made it such fun despite the cold weather; anyway it beats battling the crowds in the shops.  Lastly a big well done to Tony and Lucy – it will be shorter next time!!!!

Note: The Map on the right was sketched by John’s Mum. By pure co-incidence it perfectly includes all of the Ride route – we found out after we rode it few weeks ago when his Dad sent us a Photo of it.  It was drawn back in early 1960’s way before John was born when his parents worked at Holne Park, which was then an Outward Bound Centre.

Photos have been added by John from our pre ride, as it was far too cold on the day; although one of the group huddle behind the Tor would have made a good photo.